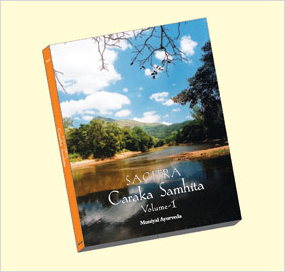 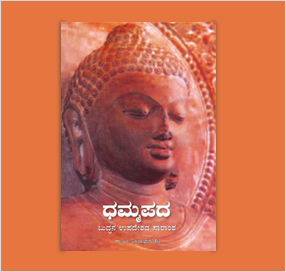 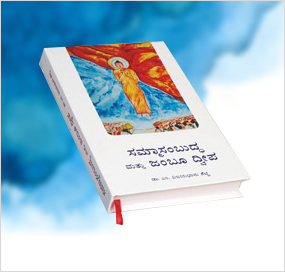 The story of Buddha and India (Kananda)

An ideal reference book for:

Sacitra Caraka Samhita is meant to be an ideal reference book for Ayurvedic Under-graduates & Post-graduates, institutions of Ayurveda all over the world and also for common people who are interested in knowing more about Ayurveda. As more than 100 countries have already accepted Ayurveda as their main system of medicine, we sincerely hope that Sacitra Caraka Samhita satisfies the need of a genuine reference book on ancient Ayurveda.

The inspiration for this sacred work of bringing out “SACITRA CARAKA SAMHITA” is none other than Bhagavan Gautama Buddha who is known in India as the “Bhaishajya Guru”, the master healer of physical and mental illness of all living beings.

This book is the English translation and transliteration of the first 30 chapters (Sutra sthana) among 120 chapters of Caraka Samhita. As against the other books that simply give the original version (Sanskrit shloka) followed by the English meaning, this book gives the split version with English transliteration of each and every word in brackets followed by its specific meaning to suit the context. This makes reading easier and conveys the original meaning of every individual word.

Similes have been used aplenty in Sacitra Caraka Samhita to explain certain subject matters. These have been represented pictorially and photographically, which is a new milestone in the field of Ayurvedic literature. The description of the subject is given in the form of columns and tables, wherever required, for easy readability. The English meaning of each word has been given after due consideration of Chakrapani’s “Ayurveda Dipika”, a commentary on the original version. In some contexts, direct opinions of Chakrapani have been added.

A lot of changes and new description styles have been followed to convey the original meaning & idea.

As explained above, the Indian civilization dates back to several “kalpas” (lakhs of years) and that is the reason why our ancient wisdoms like Ayurveda, Yoga, Maya shastra, Aagama shastra, Pãka shastra, Vaastu shastra, Shilpa shastra, Vyavasaya shastra, Nagara Nirmana shastra, Jyothisha shastra, Khagola shastra, Sangeetha shastra, Bharatha Natyam, etc. are well developed and have undergone the test of Kãla, the time factor, and are hence, still surviving and thriving.

Ayurveda, “The science of life”, considered to be one of the Upavedas, has been serving the mankind since time immemorial and still survives just because of its sheer therapeutic values. In the event of the scientific findings which have proved that ayurvedic medicine cure the disease by strengthening the body immune system, now considered to be the most scientific approach towards health, the relevancy of Ayurvedic remedies become more significant. Also, it has become very popular in the west due to major changes taking place in the consumer attitude towards health and natural products. There have been many literatures related to Ayurveda in Sanskrit. Prominent among them are “Brihatrayee” (three great literatures) – Caraka Samhita, Sushruta Samhita and Astanga Sangraha, and “Laghutrayee” (three small literatures) – Sharangadhara Samhita, Madhava Nidana and Bhava Prakasha.

Caraka Samhita represents the preachings of Punarvasu Atreya to his disciples, documented by his disciple Agnivesha. This was later redacted by Caraka and Dridhabala and came to be called “Caraka Samhita”. All subject matters related to Ayurveda, except surgery, has been explained in the form of 12,000 shlokas under 120 chapters. These chapters are grouped under eight Sthanas based on the subject theme.

Importance of Caraka Samhita in the Indian walk of life:-

A close observation of Caraka Samhita reveals that though it is a medical science, it is based on ancient Indian way of life. It is not only related to the description of diseases, but also to Indian living habits. The sixteen rituals right from Garbhadana (Conception) to Antyeshti (Rituals pertaining to death) are well known to Indians. Though some of the rituals are not in practice, Namakarana (naming ceremony), Upanayana (preparing child for proper education), Vivaha (marriage), etc. which are still in vogue, have all been described in Caraka Samhita. The text under the section on “Sadvritta” (good conduct), also describes the means and methods that enable a person to lead a good happy life in the society. In it we find advices like covering mouth while sneezing or laughing, washing hands, feet and face prior to the intake of food, restriction of scratching the ground with toes, non-violence, etc. which are an integral part of Indian culture. The daily habits such as brushing of teeth, bathing, wearing clothes, use of perfumes, etc. find similarity with the “Dinacharya” mentioned in Caraka Samhita. Likewise, the “Rutucharya” or diet regimes related to seasons have been well explained. The Indians consider food as God. Caraka Samhita elaborately describes the diets. Dhãnya Varga (Cereals), Shãka Varga (Vegetables), Phala Varga (Fruits), Mamsa Varga (Meat), Madya Varga (Alcoholic beverages), etc. represent the eight categories of food substances. Various types of occupations and the occupational hazards are explained in detail and their treatment and management have been elaborated upon.

Manpower spent on this book

A combined effort of 10 Ayurveda professors, 10 post-graduates, 10 graduates, with input from a number of Ayurveda students, using 8 computers, over a period of two years.